plotting concubinato and muerte in the ANE Criminales

Late last year I wrote a post on my experience beginning down the trail of learning python at this late stage in my learning career. I included in that post this dispersion plot of a number of different terms as they appear in the Archivo Nacional del Ecuador’s guide to its Criminales series: 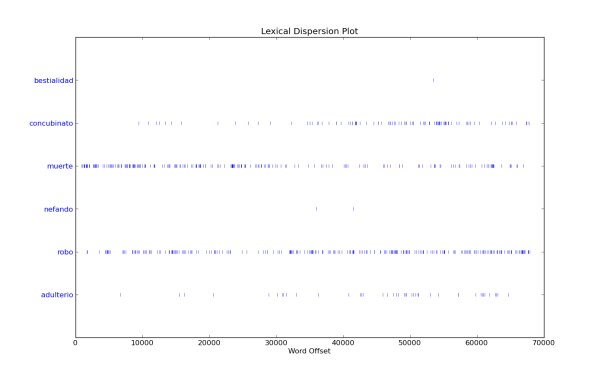 The plot was drawn from a single text file I created from the Criminales guide, and isn’t divided by year but rather by the cumulative words of the file. I went back and created a series of files from the original pdf, divided by decade, and then analyzed them using the PlaintextCorpusReader built into the Natural Language Toolkit. I used a few of the snippets from Chapter 2 of the NLTK book to play with the resulting text corpus. As a corollary to the disperson graph above, I plotted a conditional frequency distribution of two terms– concubinato and muerte– for the years 1650-1830, which gave me this: 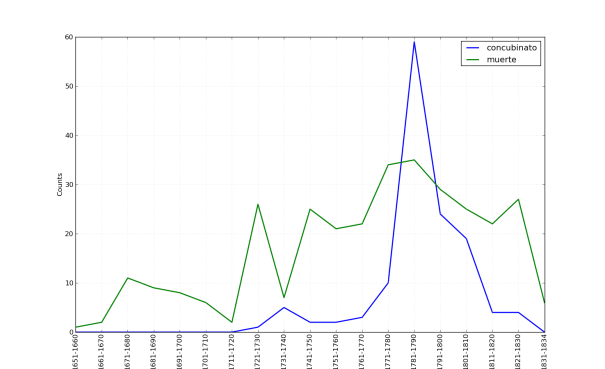 The result is quite dramatic, at least for concubinato prosecutions. There is very obvious explosion in concubinato prosecutions beginning between 1771 and 1780, and peaking the following decade. Muerte prosecutions, on the other hand, stay fairly consistent from the middle of the 18th century through 1830, the year of final Independence for the Republic of Ecuador. What is more, I do know from spending a bunch of time in the cases themselves that most (a real statistically exact term there) of the prosecutions of murder involved gender violence. I should mention, I guess, that muerte means death, and is used in the guide and in the cases to suggest murder. It’s not the only term used, for certain. Concubinato, on the other hand, signifies adultery. Again, it’s not the only term used and was frequently used to describe differing types of extramarital sex. In the case of Quito, concubinato generally meant any form of extramarital cohabitation, and in my book

I used illicit cohabitation as the main translation for the term.

At any rate, it’s hard to look at this plot and not suspect magistrate volition. Above all else, this is a plot visualizing the legal priorities of a “family values” politics, and i think that’s true for both categories. The second half of the eighteenth century, and the rise of enlightened absolutism in the global Spanish Monarchy, resulted in a real assault on women in the midst of economic crisis, government debt, and an advancing militarism. (It’s hard not to see certain parallels with today!) This was occasioned with a serious explosion of prosecutions targeting illicit sex, as well as an increase (relative to the 17th century) in violence against women by men. The one caveat on this is that we know this, in part, because women used customary legal rights to pursue their philandering husbands, and men were prosecuted for severely beating or murdering their lovers and wives, legal rights that were in retreat in the 19th century.

One comment on “plotting concubinato and muerte in the ANE Criminales”