In neglecting this blog for, really, a couple months, I let pass mention that Devon-Technologies officially released DEVONthink 2.0 at the end of February. I’m still in love with DT, which I’ve written about on a number of occasions in the past. I should probably write a long piece detailing how the new DTPO has changed some of my work habits. For now, though, here’s a little screenshot on how I’m using the Sorter to transcribe manuscript pages on a single screen. 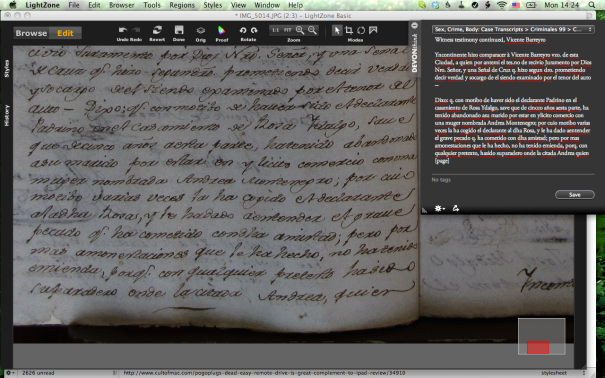 I do this when I’m on my laptop, and don’t have access to dual-screens – on the airplane, for example. It works very well. I create a destination folder in my database, drag that folder into the sorter, and then take new notes (ctrl-n) that are saved directly into that folder. I’ll usually add a few tags through that interface as well.